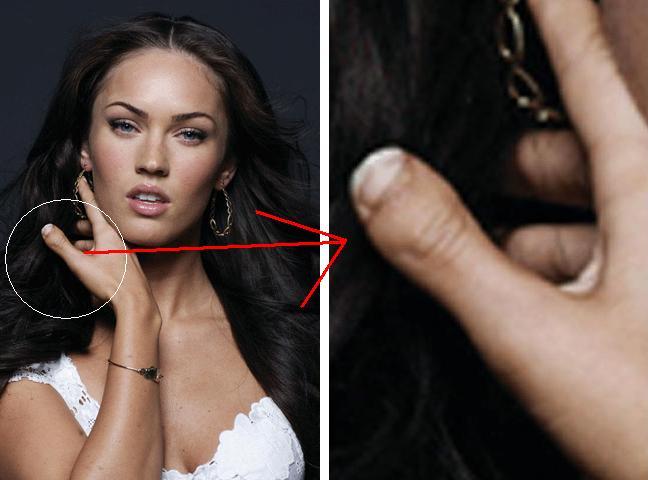 Even the most beautiful people in the world have their share of looks-related “problems”. Take Megan Fox, the beautiful Transformers star who has a “toe thumb”, as you can see in the picture above (via The Wrestling Fan).

While the photo itself could be considered a bit disturbing by some – and clearly something Megan Fox herself is aware of (and most likely uncomfortable with), the fact that she so bluntly poses with her finger exposed shows that she doesn’t care.

I would go as far as saying that this is a great lesson that we can all learn a lot from: understanding that it is not a minor defect or problem that makes us the persons we are. It’s not the bad things that should define our character or our self esteem… there’s much more than that.

And the fact that Megan Fox has no problem showing off her toe thumb deserves a lot of praise: it’s a subtle example for today’s generation to accept, embrace and love everything about them.

Because I am sure nobody will say now that because of her toe thumb, Megan Fox is less talented or, of course, less attractive. She’s a strong, amazing woman, she’s talented and extremely beautiful. That can’t change at all!

Some things to know about Megan Fox

Born in 1986, Megan Fox made her Hollywood debut in 2001 with a minor role in the straight-to-video family comedy featuring the Olsen Twins, Holiday in the Sun.

She had other minor parts in various movies and TV series, including Bad Boys 2, What I Like about You and Ocean Ave.

Her breakthrough role, the one that put her in the spotlight was 2004’s Confessions of a Teenage Drama Queen where she had a bigger part in the comedy led by Lindsey Lohan and Adam Garcia.

But the movie that really put her in the spotlight and guaranteed her rise to fame was 2007’s Transformers – still considered by many her best movie to date.

Afterwards, she got leading or important roles in various projects, including Jennifer’s Body, Teenage Mutant Ninja Turtles or Passion Play. But she never managed to hit the A-list of Hollywood.

She doesn’t have a lot of movies under her belt and even though most of the features she’s been part of have received mixed or mediocre reviews, she remains one of the best known actresses in the world, with a massive fanbase worldwide.

And the fact that Megan Fox has a toe thumb only proves that nobody’s perfect – but even so, you can still live a great life. Her networth of around $8 million and successful career prove that!

What do you say? Do you agree with me that this minor problem that the star has does not affect her overall image? Do you still consider her beautiful even after this “revelation”?

(Because I must admit that after seeing this, you can’t unsee it and you’ll even notice her toe thumb in her movies as well. Nobody’s perfect, folks!)

UPDATE note: Article updated in 2019 with the “about Megan Fox” section to give more substance to the article and show that small defects don’t matter!