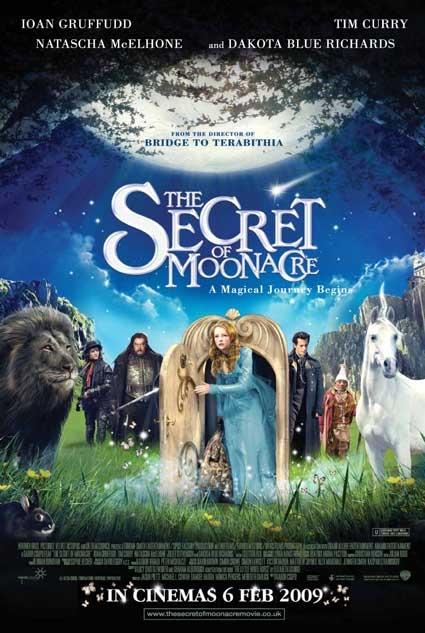 The Secret of Moonacre can safely be described as a family-friendly fantasy adventure, most suitable for tweens and those wishing to watch a fantasy/fantastic movie set in a truly novelesque setting. Except for that, don’t expect to get too much since generally all the cliches in movies are here too.

The Secret of Moonacre presents the story of a little girl, Maria, who becomes an orphan and a homeless after her father dies. He only leaves her with a book and Miss Heliotrope, the faithful and funny servant/tutor. Maria has to move to her uncle’s Moonacre Manor, set in a dying world in which a long-aged feud plays the main role. The ultimate thing that will happen: total destruction. But you’ve guessed it right, Maria will save the day!

Don’t except a very smart or comprehensive plot! The story of The Secret of Moonacre lacks depth and many things remain unexplained after the movie ends, while others happen chaotically and without an explanation. As I said, most of the characters are cliches and not at all original, but I am sure that kids – since I’m sure they’re the main audience for the movie – will actually love them. Because, even though not original, the characters are loveable and beautiful, the settings are simply impressive and both acting and special effects are OK for such a movie.

Personally, as a grown-up, I didn’t find The Secret of Moonacre amazing, even though it made me laugh every now and then and it ended up as a decent experience. However, I would only strongly recommend it to those who are huge fans of the fantasy genre or to those who want to offer some quality, family-friendly entertainment to their children.

Conclusion: I would give The Secret of Moonacre a rating of 6 out of 10.