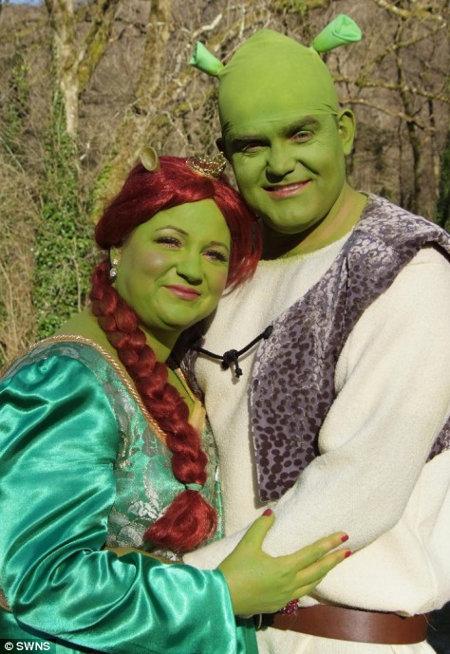 Two British lovers and at the same time fans of the Shrek series have decided to officially join their destinies during a Shrek-themed wedding that turned out to be incredibly fun, if we are to judge the screenshots below!

This great event took place back in 2009, but I think that it still remains relevant even today.

The couple, 40 year old Christine England and her now-husband Keith Green, 44, as well as the 100 guests wore Shrek-themed costumes and we must admit that it was at least an interesting act, with both the wife and the broom look wonderful, but apparently with one important guest missing: Donkey (although there is a big dog in one image, and that might be Dogkey or something, right?)

I am not 100% sure if they were fans of the animated franchise, or they just thought that their name – Green – works perfectly with the Shrek series. Either way, the results are awesome, as you can see in the photos below.

Christine said about their cool Shrek-themed wedding: “The idea just came to me. I knew what we would go as because Keith looks just like Shrek.” I’m sure that most of the people won’t take that as a compliment, but apparently Keith did and the result was impressive.

Now, he said nothing about Christine looking like Princess Fiona, otherwise there might’ve been no wedding to start with.

Either way, congratulations to the newly wed couple, the Green family! No pun intended, obviously, as that’s their name. What a great wedding!