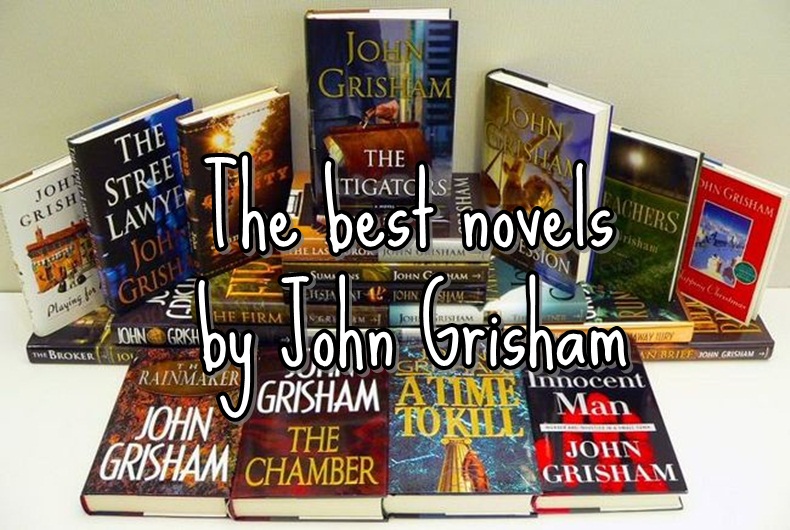 John Grisham is one of my favorite authors – and it seems that I’m not the only one riding this boat as his books have sold more than 275 million copies to date and many have been turned into successful Hollywood movies. But even though John Grisham is a fairly consistent writer and all his books offer great reads, most of them impossible to put down, some are better than the others and in this article I will share with you the 10 best John Grisham books that you’ll love to read if you haven’t done so already.

So if you just read one novel and would like to explore his books and make sure that you pick an amazing one as your next purchase / read, then make sure to check out my list below of the 10 best John Grisham books to read and you can even get them all for guaranteed satisfaction! I am including both links to the US store, as well as links for European visitors. This is my all time favorite John Grisham book (and also the first Grisham novel that I read) – it’s absolutely amazing, well written and you can’t put it down. Here’s what the book is all about:

“Eleven-year-old Mark Sway and his younger brother were sharing a forbidden cigarette when a chance encounter with a suicidal lawyer left Mark knowing a bloody and explosive secret: the whereabouts of the most sought-after dead body in America. Now Mark is caught between a legal system gone mad and a mob killer desperate to cover up his crime. And his only ally is a woman named Reggie Love, who has been a lawyer for all of four years. Prosecutors are willing to break all the rules to make Mark talk. The mob will stop at nothing to keep him quiet. And Reggie will do anything to protect her client…” A true Grisham classic, this is the first of his books that got the bestseller status and basically the novel that turned him into an AAA, best selling author. With over 7 million copies sold worldwide and turned into a great movie featuring Tom Cruise, The Firm is a must read. Here’s the plot:

“When Mitch McDeere signed on with Bendini, Lambert & Locke of Memphis, he thought that he and his beautiful wife, Abby, were on their way. The firm leased him a BMW, paid off his school loans, arranged a mortgage, and hired the McDeeres a decorator. Mitch should have remembered what his brother Ray–doing fifteen years in a Tennessee jail–already knew: You never get nothing for nothing. Now the FBI has the lowdown on Mitch’s firm and needs his help. Mitch is caught between a rock and a hard place, with no choice–if he wants to live.” The most recent novel by John Grisham, at least at the moment of writing this article, it proves that Grisham can easily evolve and stay up to date with modern technology, while also delivering the same high quality writing that keeps you glued to the book’s pages until you finish reading. With Rogue Lawyer, Grisham proves that he still has a lot to say. Here’s a quick summary of the book:

“Sebastian, the hero of our book and an typical street lawyer, defends people other lawyers won’t go near: a drug-addled, tattooed kid rumored to be in a satanic cult, who is accused of molesting and murdering two little girls; a vicious crime lord on death row; a homeowner arrested for shooting at a SWAT team that mistakenly invaded his house. Why these clients? Because he believes everyone is entitled to a fair trial, even if he, Sebastian, has to cheat to secure one. He hates injustice, doesn’t like insurance companies, banks, or big corporations; he distrusts all levels of government and laughs at the justice system’s notions of ethical behavior.” A very sensitive read, a novel that masterfully treats the subject of personal justice and human value. This is a novel that’s not only exceptionally written, but one that will put you thinking helmet on as well. Here’s what it is about:

“The life of a ten-year-old girl is shattered by two drunken and remorseless young men. The mostly white town of Clanton in Ford County, Mississippi, reacts with shock and horror at the inhuman crime. Until her black father acquires an assault rifle and takes justice into his own outraged hands. For ten days, as burning crosses and the crack of sniper fire spread through the streets of Clanton, the nation sits spellbound as young defense attorney Jake Brigance struggles to save his client’s life–and then his own.” This is the first book in the series that introduces us a non-traditional main character: a young kid that considers himself a street lawyer. I love to think that this has been inspired by The Client and I have enjoyed reading this novel (and all in the series!). Here’s the synopsis:

“In the small city of Strattenburg, there are many lawyers, and though he’s only thirteen years old, Theo Boone thinks he’s one of them. Theo knows every judge, policeman, court clerk—and a lot about the law. He dreams of being a great trial lawyer, of a life in the courtroom. But Theo finds himself in court much sooner than expected. Because he knows so much—maybe too much—he is suddenly dragged into the middle of a sensational murder trial. A cold-blooded killer is about to go free, and only Theo knows the truth.”

Click here to get Theodore Boone: Kid Lawyer (or here for UK/Europe) Featuring the main character from A Time to Kill and an equally interesting plot that involves racial tensions, Sycamore Row is that type of book that you can’t put down – and the book you need to give to “that friend” of yours so he can read it and change completely. Here’s the plot outline:

“Seth Hubbard is a wealthy man dying of lung cancer. He trusts no one. Before he hangs himself from a sycamore tree, Hubbard leaves a new, handwritten will. It is an act that drags his adult children, his black maid, and Jake into a conflict as riveting and dramatic as the murder trial that made Brigance one of Ford County’s most notorious citizens, just three years earlier. The second will raises many more questions than it answers. Why would Hubbard leave nearly all of his fortune to his maid? Had chemotherapy and painkillers affected his ability to think clearly? And what does it all have to do with a piece of land once known as Sycamore Row?” This is considered on of Grisham’s best books and the movie is indeed awesome, but it doesn’t rank too high on my list because of… well… personal preferences. I still enjoyed reading this book, but for some reason I felt that the action and plot where not that great. It still remains a good book that you must read if you love this author. Here’s what it’s all about:

“To Darby Shaw it was no more than a legal shot in the dark, a brilliant guess. To the Washington establishment it’s political dynamite. Suddenly Darby is witness to a murder–a murder intended for her. Going underground, she finds that there is only one person–an ambitious reporter after a newsbreak hotter than Watergate–she can trust to help her piece together the deadly puzzle. Somewhere between the bayous of Louisiana and the White House’s inner sanctums, a violent cover-up is being engineered. For someone has read Darby’s brief–someone who will stop at nothing to destroy the evidence of an unthinkable crime.”

Click here to get The Pelican Brief (or here for UK/Europe). I loved this book and I am sure that everybody who would read it will (it’s also a New York Times bestseller, so we would not be alone). It is a book that you’ll love to read, one filled with mystery, a book that proves that not everything’s exactly as it first seems to be. Check out the plot synopsis below:

“Once he was a well-liked, well-paid young partner in a thriving Mississippi law firm. Then Patrick Lanigan stole ninety million dollars from his own firm—and ran for his life. For four years, he evaded men who were rich and powerful, and who would stop at nothing to find him. Then, inevitably, on the edge of the Brazilian jungle, they finally tracked him down.

Now Patrick is coming home. And in the Mississippi city where it all began, an extraordinary trial is about to begin. As prosecutors circle like sharks, as Patrick’s lawyer prepares his defense, as Patrick’s lover prays for his deliverance and his former partners wait for their revenge, another story is about to emerge. Because Patrick Lanigan, the most reviled white-collar criminal of his time, knows something that no one else in the world knows. He knows the truth.”

Click here to get the novel (or here for UK/Europe) Fast paced and ingenious, this is one of Grisham’s more recent novels and also a very good one. You won’t be able to put this one down until you read the final page! Here’s what it’s all about:

“In the history of the United States, only four active federal judges have been murdered. Judge Raymond Fawcett has just become number five. His body is found in his remote lakeside cabin. There is no sign of forced entry or struggle. Just two dead bodies: Judge Fawcett and his young secretary. And one large, state-of-the-art, extremely secure safe, opened and emptied. Just one man knows who the killer is, but this man is in prison…” Grisham manages to hit a home run with this novel, one that’s not only for baseball fans, but for those who love reading a good book. It’s a bit different than what you’re used to get from Grisham, but it sure is a great read. Here’s the plot:

“It’s the summer of 1973, and Joe Castle is the boy wonder of baseball, the greatest rookie anyone has ever seen. The kid from Calico Rock, Arkansas, dazzles Chicago Cubs fans as he hits home run after home run, politely tipping his hat to the crowd as he shatters all rookie records. Calico Joe quickly becomes the idol of every baseball fan in America, including Paul Tracey, the young son of a hard-partying and hard-throwing New York Mets pitcher. On the day that Warren Tracey finally faces Calico Joe, Paul is in the stands, rooting for his idol but also for his dad. Then Warren throws a fastball that will change their lives forever.”